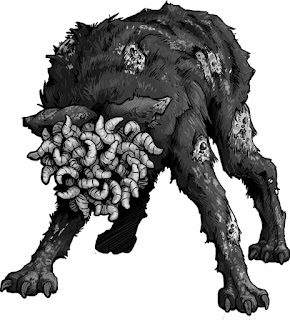 *For image credits as published, please see Fetid Hound creature sheet.
Creature Abilities
Creature Abilities represent the skill set a creature naturally possesses. Unlike character skills, these are not limited to uses per day nor independent advancement. For this discussion, we'll compare the Wolf and Fetid Hound in their Ability design.
Based on Attribute design, it would appear the Wolf has a higher than expected attribute pool than suggested. However, it should be noted, the wolf increases a size category at Rank 5. As mentioned at the end of the article, creature creation is not a process set in stone. The creature does have additional bonuses to hit when starting at lower ranks. However, the damage it deals is also set quite low. The idea is to balance bonuses and damage to create playable encounters.
When placing the wolf and fetid hound next to one another, it is evident both are canine body forms. Attribute distribution between the two forms is wildly different. Wolves have a spread spanning all attributes, with an emphasis on physical and sensory abilities. Fetid hounds have less attribute points with stacking towards the physical attributes. In addition, there are no mental attributes allocated to the creature. Undead, plants, and mental infections such as the fetid grub remove all mental components. Mind altering effects simply cannot be established in entities lacking a mind.
Despite different attribute bonuses, the abilities of each creature have some basic features. The damage of each is set fairly low. This grants players a chance to encounter potentially terrifying creatures on terms they can deal with early during their development then later once game play becomes more advanced.
Damage increases and status effect boosts occur throughout the Heritage advancement. The Heritage advancement causes the two creatures to have extremely different attack sequences and gives each a unique flare. When constructing abilities, it's always best to set the start point fairly low and increase through Heritage advancement. Rank 10 is always set as the supreme version of the creature design - an Alpha specimen. Once the abilities are scaled down to barebones Rank 0, begin filling in gradual increases to meet the Alpha version of your creation.
NPC Challenge Rating and Health
An additional method of scaling creatures is through Challenge Rating. GMs are advised to total all skill points of all characters at the table and divide by 25. This provides the GM with a Challenge Rating. It also gives the GM a Party Rank, which is used to determine creature rank.
Suppose 4 players are sitting at a table, each having 30 points. The grand total is 120 skill points. Divide 120 by 25 and get 4.8. Depending on group experience, this is either read as a 4 or 5. Suppose the GM decides the lack of player experience merits an encounter rank 4.
This means the GM should reasonably plan on 4 rank 1 creatures, 2 rank 2 creatures, a rank 1 and rank 3 creature, or a single rank 4 creature. This value gives us a 'thereabout' measure as to how much a party can reasonably handle during a single encounter. The GM settles on 2 rank 2 creatures.
One rank 2 creature is decided to become a simple base wolf encounter. This creature has 27 Life Points and 11 Mental Points.
The second creature becomes a Mid Encounter creature. We quickly take note that LP has a 6X modifier while MP has a 3X modifier. No matter the circumstance, the wolf begins with 27 LP. As a Mid Encounter, it also gains 6 X 2 Ranks = 12. This is added to the 27 Base LP, giving us a wolf with 39 LP. MP is also modified by 3 X 2 Ranks = 6 and added back to the 11 Base MP. Our Mid Encounter wolf now has 17 MP.
Although each creature has a designation of Rank 2, use the same attack sequences, and Heritage Advancement, they will have different degrees of toughness.
The Challenge Rating gives GMs a quick method of adjusting encounters without having to stop and perform complex conversions or switch encounters when players seem to plow through combat.
Thanks again, guys!