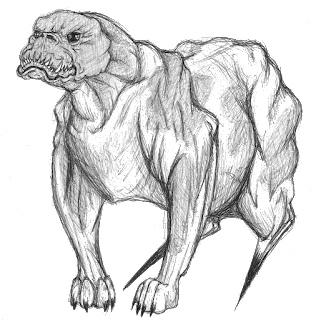 Visualizing creatures has become second nature to me. Fortunately, I've always had a very active imagination and writing provides an outlet for the things I envision. When creating creatures, I usually begin with the physical description and expand into the general description of its abilities. Once I've got the concept on paper, the creature needs to be converted into a playable form. The Creature Blank can be downloaded by clicking the link. The file is a Word Blank and can be modified to create your own creatures.

A few tips on allocating attributes:

Swarms are by far the most loathsome encounters in the system. A single cockroach is laughably easy to kill. When swarming, they bypass all armor bonuses, swarm into body openings, and deliver devastating status effect damages. Making matters worse, they can appear with little provocation and vanish with little disturbance to the environment.

The point is, if you are homebrewing creatures, make them fit in the world setting you are designing. The world doesn't have to be populated by giant monstrosities. There should be a range of encounters from the smallest to the largest.

The following chart is a good rule of thumb when designing creatures.

Due to its wide range, the Diminutive category has the greatest opportunity for misuse. Please don't think this is a justification for having a normal 3" canary with 9 attribute points. If this is the route taken, you will find your players dissatisfied and losing interest in the story setting. This size category covers creatures from the size of ants to medium dogs.

Small creatures includes large dogs, goats, and coyote. Depending on the creature, the attribute spread will largely boast 1's and 2's for most categories - with a greater occurrence of 1's.

Medium creatures include humans and most player races, wolves, and cougars. The attribute spread will largely boast 1's and 2's for most categories - with a greater occurrence of 2's.

Large creatures are best represented by lions, tigers, bears, and horses. The attribute spread will largely boast 2's and 3's for most categories - with a greater occurrence of 2's.

Huge creatures include young dragons, adult yeti, and some giants. The attribute spread will largely boast 2's and 3's for most categories - with a fairly even occurrence of 2's and 3's.

Although attribute distribution is fairly evenly dispersed, these creatures often require custom builds and may have attribute shifts in areas of specialty. A good example is an elder snow dragon specializing in necromancy. The spells and abilities relating to necromancy focus largely on PR and IQ. A creature reaching such power is expected to have a degree of power stacking in order to achieve such success.

Heritage Ranks. As the creature encounter increases with player rank, so will the attributes associated with the creature. In some instances, advancing skills open new abilities which benefit from the advancement. When opening the Branauch creature profile, the point distribution is consistent with the above chart. Although points are allocated in favor of its primary attacks, the attribute points are not stacked in favor of a single attribute.

The section located below the Branauch Abilities is the Heritage Advancement. As the creature increases in rank, it gains modifications to its abilities which customize it for game play. This provides a continual challenge for players despite the rank. It also gives the GM the freedom to place creatures in a setting an not worry about the players advancing beyond the creatures abilities.