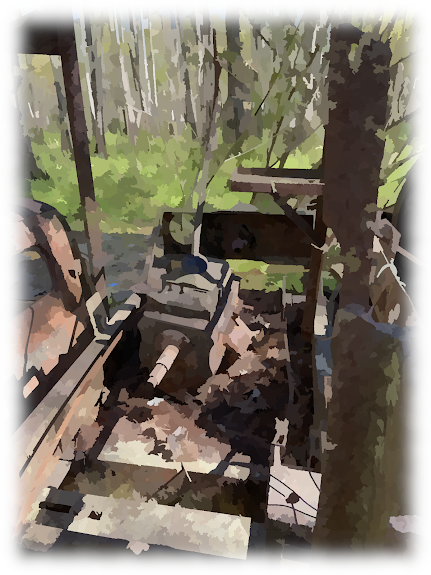 Picture by Dakota Naramore, Facebook Group: Abandoned Louisiana
The current edits are resulting in fewer and fewer mechanical errors. Most corrections are grammatical errors caught with Grammarly and other editing software packages. We have made a few changes from the original version, which change how gameplay.

During combat, characters received damage as LP (or Life Points), and weapons received damage only on critical fails as IE (Item Efficiency Points). The system was clunky and prevented an easy transition from item to character damages. Questions often arose when a character decided to wail away at a wall to knock a hole in it. How did was damage dealt? At what rate did it accrue? At what point did the weapon damage convert into IE damage?

Items still receive damage on critical fails. The Item LP serves a function similar to that of IE. Now, attachments require the Item LP of the host item and are lost when the Item LP holds them in place. Specific Status Effects can now deliver damage to both characters and weapons universally, making LP conversion to IE unnecessary.

True to the original vision of Tortured Earth, characters have access to a wide range of skills that enable them to modify existing items and custom design items. With proper investment, characters are allowed to create Blueprints and design items or change the component quality during item creation to modify items' properties or alter their effects.

As we continue to comb through the manual, the system's refinements clarify the diversity of abilities and skills we have always hoped Tortured Earth would represent. As this editing phase comes to a close, the oncoming Creature Manual edits don't seem as daunting.

As I type this, I realize the final chapters have yet to be edited, and I still have to create the Table of Contents and Index - both requiring at least a full day and a final print copy.