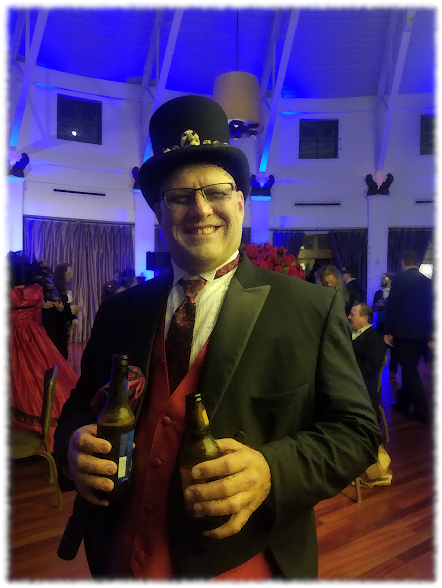 One of my former convention workers stopped by today for a visit. Normally a rather mundane exercise, the visit brought to light several interesting things.

First, on the realizations list: I need to put more effort into maintaining contact with friends. Over the course of a year, not only has my young friend traveled a rough road, but he'd grown considerably in the interim. Despite all he'd been through, the changes in his self-awareness were refreshing. At the end of the visit, we parted with a heartfelt hug and promises to make a better effort on both our parts.

A large part of his visit was spent with him flipping in amazement at the new Tortured Earth edition. Over the past year, only a handful of people have seen pieces of the project. To date, he was the first to see the entire scope of the new edition. With each page turned, he seemed to glow with anticipation of the next page. It was quite a show.

After spending nearly a year burrowed in balancing mechanics, formatting of information, and designing abilities, I seem to have lost sight of what it is I am truly trying to accomplish. The book has remained segmented as independent chapters and word documents to reduce the project to bite-sized pieces. Editing and formatting are easiest when single chapters can be evaluated and compared. Having someone to lay the entire project before and knowing their only comparison is the original work definitely boosts morale.

Next on the realizations list is appreciation. I guess everyone who has ever created gets caught in that phase, where all they want to see is the light at the end of the tunnel. We know it's getting brighter, and we assume this means we're getting closer to the end. Sometimes, we need to take a pause and look at how far we've come. It is true we may not be at the end. However, we still covered a lot of territory and need to acknowledge what we've learned and experienced along the way.

Most importantly, take time to share yourself. As many already know, I'm a teacher by trade. At a few points during our conversation, he indicated I was a positive influence in his life. From my perspective, I really haven't acted in any way that I wouldn't have acted with anyone else. From his vantage, the convention scenes, the private conversations, and the silly little things we do in our daily friendships meant something to him.

I have always felt each of us has an impact on those around us. We don't see the changes we create because we are the source. However, good or bad, our actions cause change. As a teacher, I try to monitor these impacts and shift them toward the positive end of the spectrum. With friends, I usually turn off those filters. Those poor fools get a blast of pure me. Apparently, this has value as well.