August 01, 2021
The issue with having a convention in a tourist town is the abundance of amazing alternatives to participate in. Shops, museums, local attractions, and restaurants all compete for the the traveler's attention. In short, the show which should stand out simply blends in to the scenery.
For Tortured Earth, the convention is a bust. The traffic was light both days, spending was conservative, and attendee interest was mild. The observation seems shared among several vendors - evident by the abundance of free time and ability to roam without customers at their booth.
We did meet some amazing creators and picked up a potential artist. However, attending conventions for contacts would be far more beneficial and economical as attendees and not vendors.
We are looking for venues in the area. The region is amazing and the community does support conventions. The power of other events simply overshadows the allure of any event held in the city proper. More than one attendee commented that the convention was very similar to the shops outside.
In all fairness, I did speak with one artist who managed to pull a profit. His artist table was cheap, he didn't travel with a convention team, and his hotel choice was minimalistic. The guests did fair well. None down the two rows near me boasted such earnings.
Personally, I'd be interested in seeing what would happen if the convention was moved to Knoxville or Chattanooga, TN. Both towns are similar in size but do not have the tourist trap feel of Gatlinburg. I feel if the glamour factor of a town is removed, the convention itself should be able to shine a whole lot brighter. I observed this with VisionCon, a convention held in Branson Missouri.
Branson itself is a tourist trap. However, the convention was held after the tourist season when the convention center was a whole lot cheaper to rent. Without the theme parks, restaurants, and gift shops working at full capacity, the town has a bit of a ghost town feel. The convention was well attended and maintained a high interest among the attendees.
It would be interesting to see if shifting the location or timing of the convention would have an impact on attendance.
Vendors and artists we've met worth note:
Comic book artist: Michael Phillips, The Draconis Project and Grund 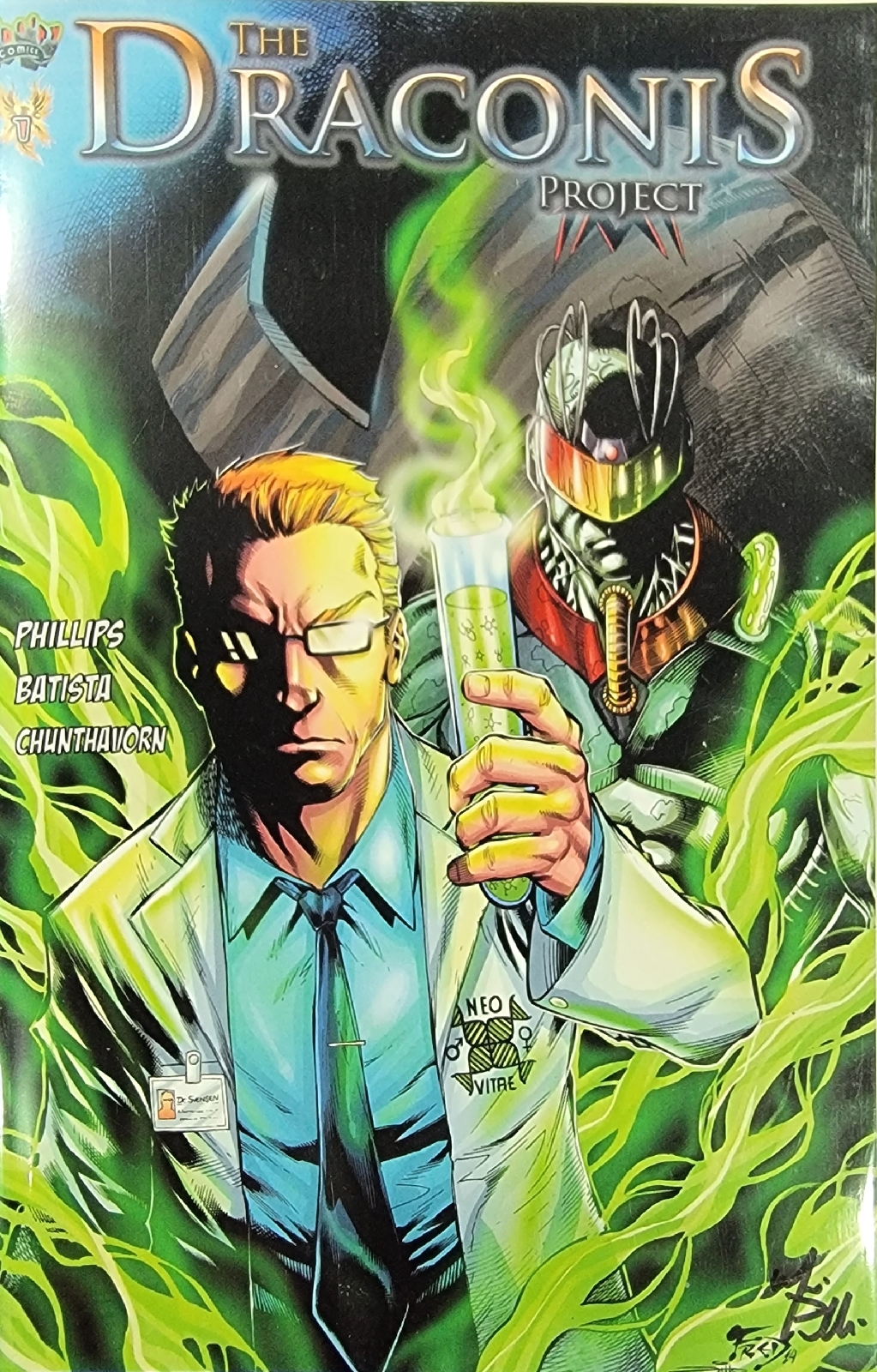 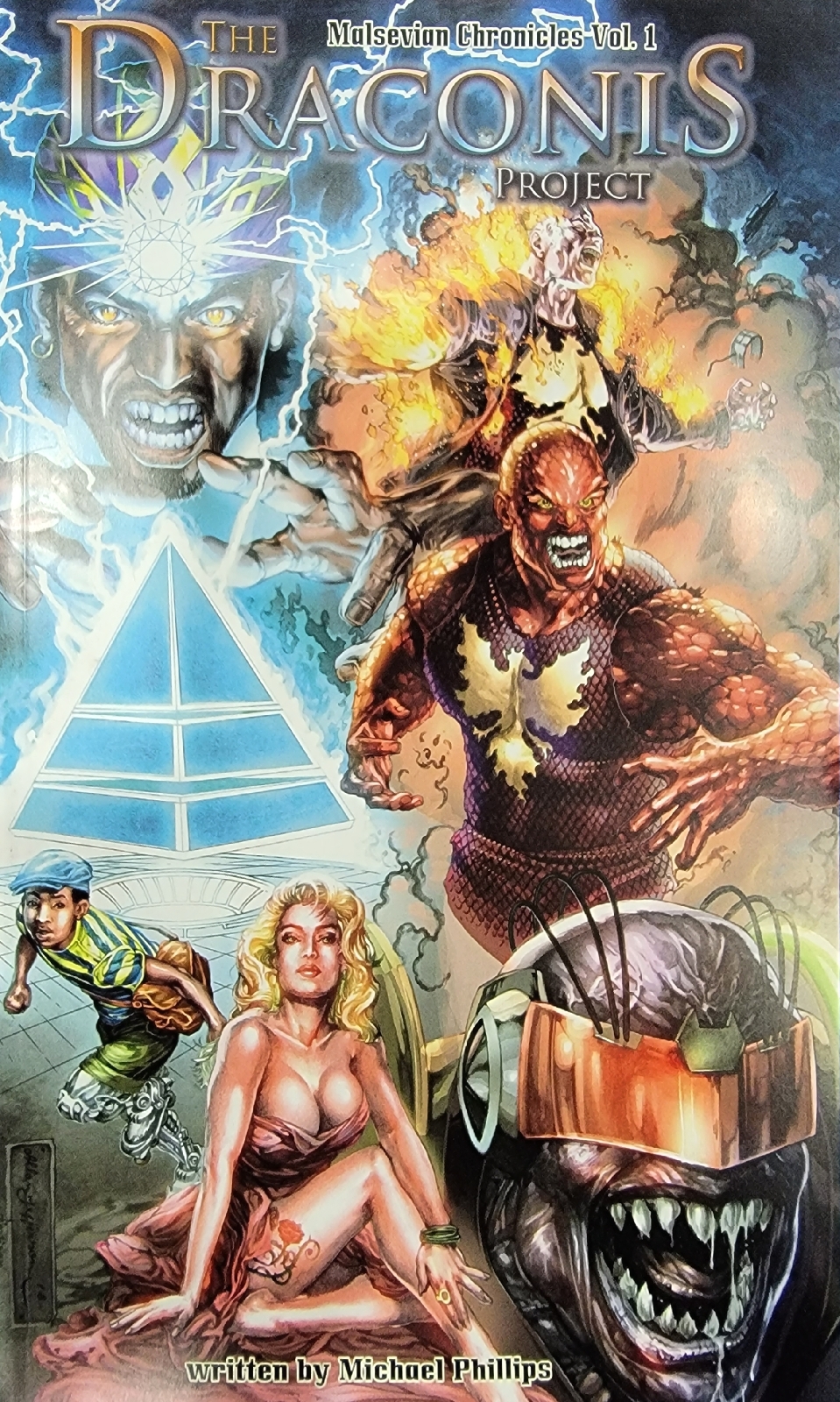 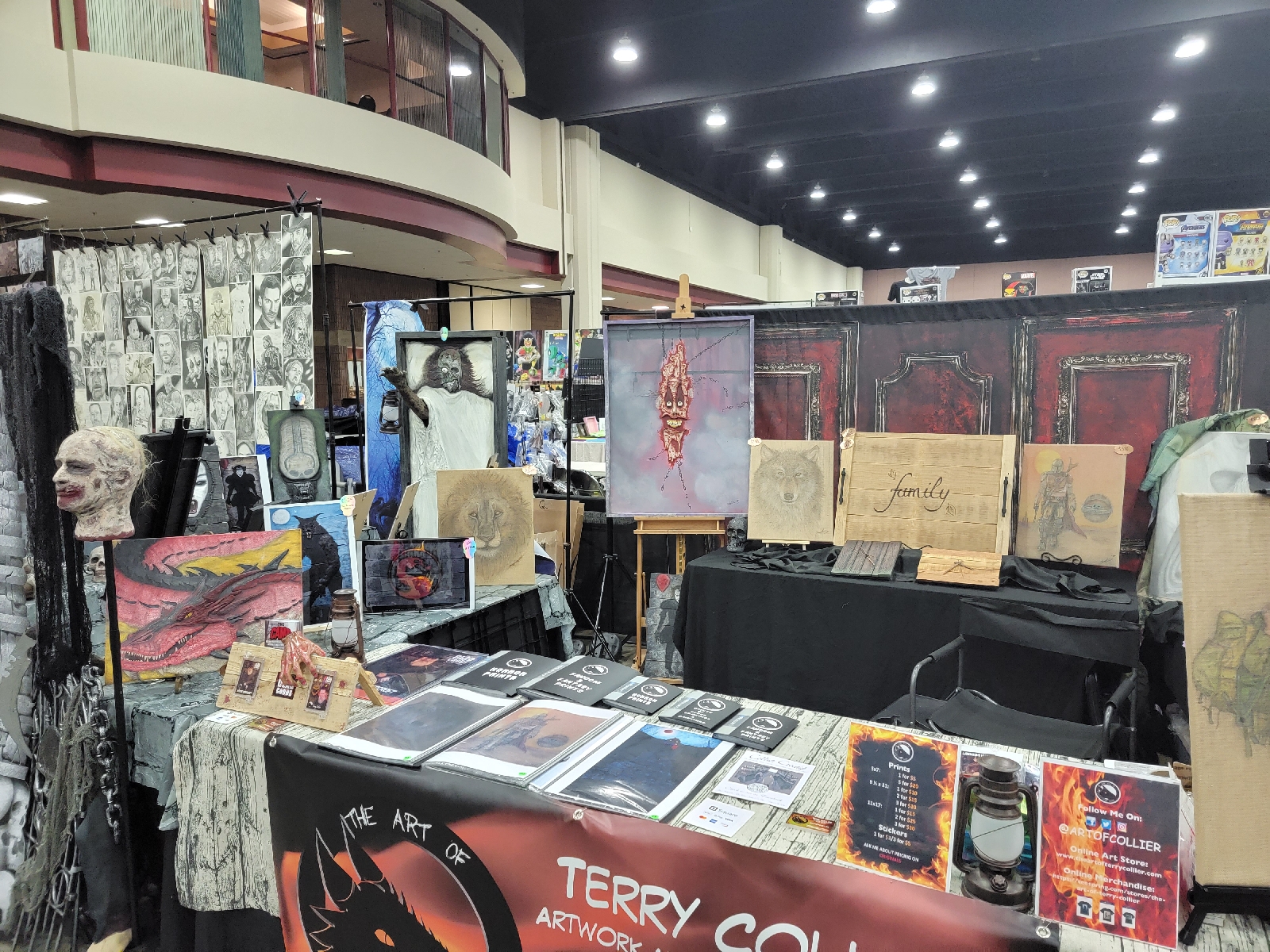 As a horror artist, Terry can definitely design a booth for both drama and interest! 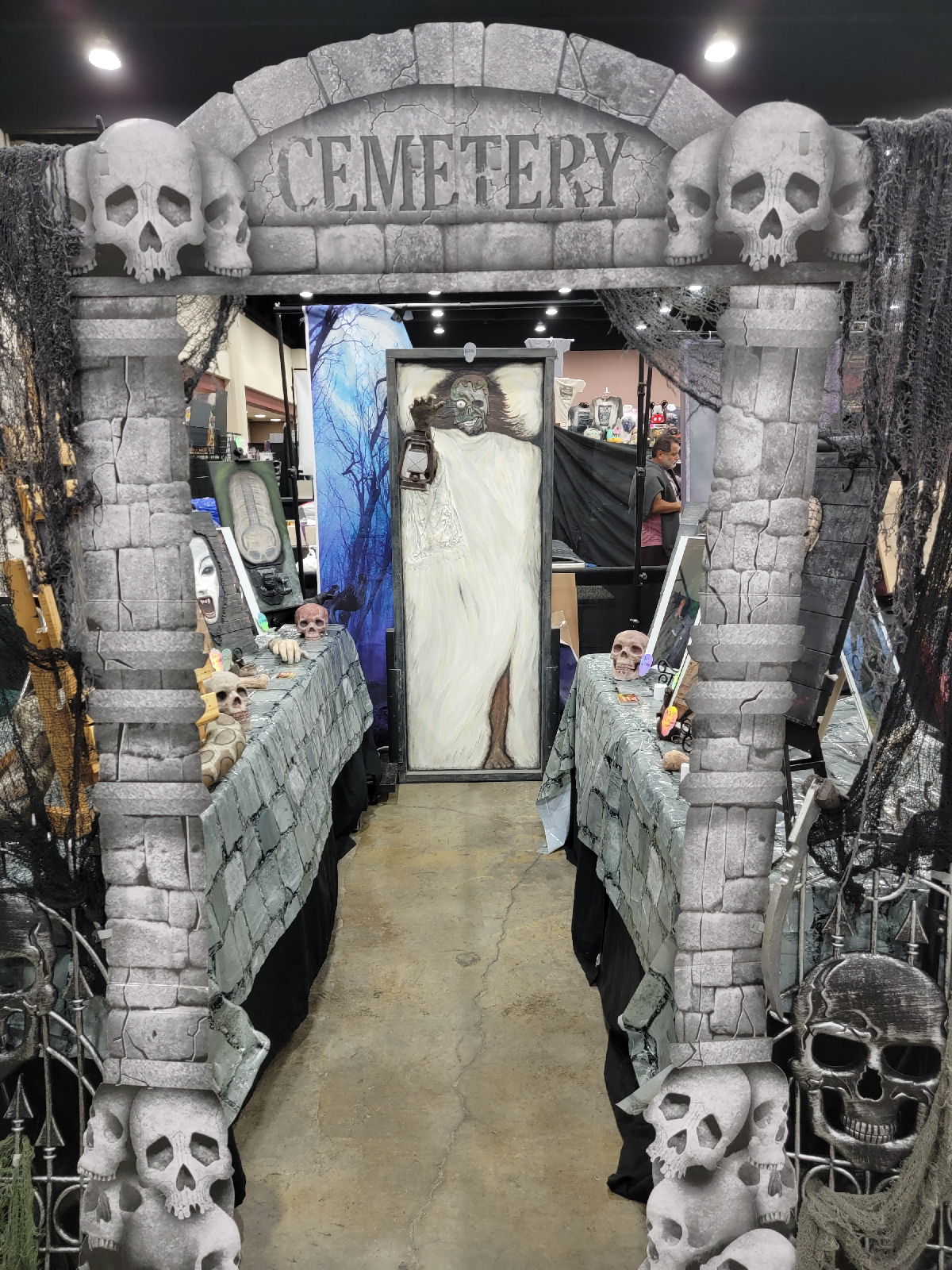 Jessica Collier, Instagram: @losthermarbles_21
Jessica will be commissioned to complete some creature illustrations for the upcoming modules. 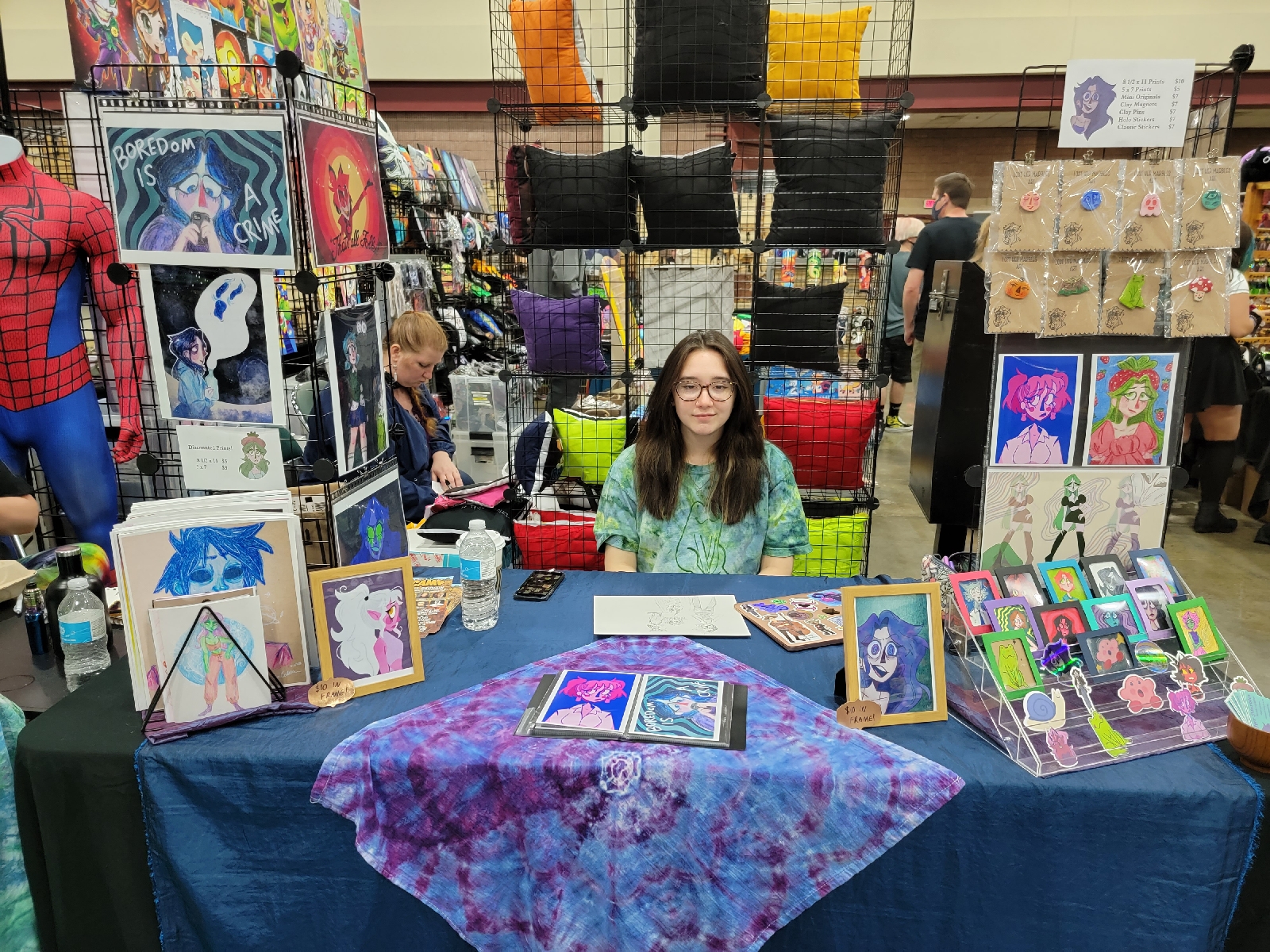 The 2.0 version of Tortured Earth are now available on Amazon through the following links: 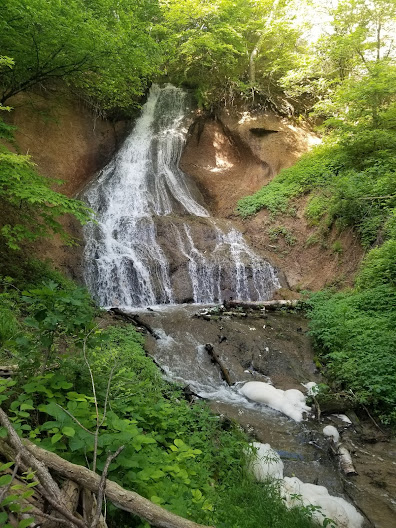 I have a Bachelor's in Biology and a Master's in Environmental Chemistry. Clearly, I have an analytical approach to solving problems and a flare for fiction. I love how nature seems to fit together to make functional systems. I also love stories having unusual elements somehow fitting seamlessly together and creating new and alien worlds. This makes stories both relatable and believable.  Unfortunately, this concept has yet to reach game designers. Many designers create creatures having features not in line with the environments from which they supposedly originated. A classic example being the red dragon. A massive carnivore living on mountaintops, breathing fire, and living in hot environments. On the other end of the spectrum, we have the white dragon. Another massive carnivore living on mountaintops, breathing ice, and preferring cold environments.  This imagery makes absolutely no sense.  Let's begin with the red dragon. To begin with, life on this planet has develo
Read more 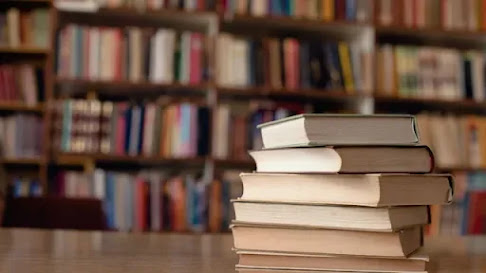 Over the past few weeks, Kevin and I have been working to add stories to the Tortured Earth collection. At the moment, we are converting some of the convention modules into boxed sets - each set containing a Rules Lite GM Guide, Rules Lite Player's Guide, Story booklet, Fold-out maps, Character sheets for 10 people, and two sets of dice.  The current design of the Rules Lite set allows players to run the boxed scenario but also opens the doors for a broader storyboard if a GM is creative and wants to get a little extra mileage out of the set. Each boxed set is designed to serve as a story starter for a larger campaign and can be used by GMs as a means of introducing players to more advanced game mechanics. With all that said, allow me to inform you of the reality of a small game company producing said boxed sets. Due to the uncertainty of customer interest in the boxed set, we have been producing the sets ourselves. This means we have a spiral binding machine and assemble the sets
Read more 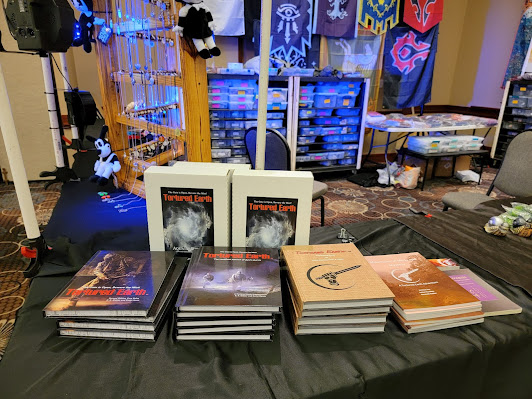 Part of launching into this industry is the continual creation process. The development of Tortured Earth was a means to an end - the development of a framework in which a broad range of stories could be told. Now that the system is finalized, the process of storytelling must begin. Kevin and I are currently focusing on the development of one-shot adventures. These kits are retrofitted from the 2.0 Core Ruleset and give players a taste of the system without having to invest in multiple books. Other game systems have developed similar products for the same goal. The Rules Lite versions allow for replayability while the core books provide the full flexibility of the system. A creative GM will be able to adapt the Rules Lite version for homebrew adventures fitting in the world setting for which the kit was built. Currently in the editing phase are four such adventures. Two have been completed and are already in production and being distributed through the convention circuit. Eventually, t
Read more